Home » Blog » News » What is the main cause of motorcycle accidents?

What is the main cause of motorcycle accidents?

Alongside pedestrians and cyclists, motorcycle riders are among the most vulnerable users of UK roads. Unfortunately, while motorcyclists only take up 1 per cent of the total amount of traffic on our roads, 18 per cent of deaths are attributed to this method of transportation.

Every type of vehicle user risks the chance of being involved in a road traffic accident and, depending on the circumstances, the outcome can be severe to anyone involved. However, as motorcycles are smaller, less balanced on two wheels and lacking in the protective shell that cars, vans and other road vehicles have, the same level of damage caused to a motorcycle rider is likely to be far more devastating than the damage a car user could sustain.

With a view to informing anyone involved in this type of incident, this blog explains the main causes behind motorcycle accidents and statistics around how frequently they happen in the UK.

How likely is it to get in a motorcycle accident?

According to road safety charity Brake, on average, a motorcyclist is seriously injured or killed on UK roads every hour and road users on two wheels are 63 times more at risk per miles travelled than road users in four-wheel vehicles.

Statistics from the Department for Transport claim that 2013 alone saw 18,752 injuries to motorcyclists on UK roads. From this figure, 4,866 people suffered serious injuries and 331 people were killed. 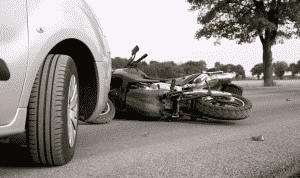 When do most motorcycle accidents happen?

The Department for Transport claims that motorcycle accidents are most commonly caused by collisions with cars, with these accidents accounting for 71 per cent of fatalities and 84 per cent of casualties to motorcycle riders. From this data, a key finding was that a contributing factor to many of these incidents was that the driver of the vehicle failed to look or check mirrors properly before the incident occured. Data for HGVs, however, suggested that a collision with a motorcycle was down to the driver’s failure to identify a blind spot.

Other findings from the statistics provided by the Department for Transport suggested that motorcyclist fatalities were more likely to happen at junctions, potentially caused by the heightened number of vehicle interactions and movements as opposed to other road conditions. In 2014, 43 per cent of motorcycle serious injuries or deaths occurred at T-junctions and crossroads.

What is the cause of motorcycle accidents?

Other likely causes of motorcycle accidents include poor road conditions, misjudging space between vehicles or speed, the weather and a feeling of over confidence in the driver at fault.

Can I claim for injuries in a motorcycle accident?

Not only are victims of motorcycle accidents able to claim against the person at fault, but there are several different expenses they can claim for. In any compensation claim, the victim or victims can claim for what’s known as general damages and special damages.

General damages account for any pain suffered as a result of the accident – whether physical, mental or emotional – and special damages are paid to make up for financial losses, the inability to work and any expenses that came from the incident and the effect it had on the victim.

More specifically, in a motorcycle accident, general and special damages could pay for injuries sustained, emotional or psychological damage from the incident, a loss of earnings if the victim is unable to work or temporarily or severely obstructed by the incident, to fund medical treatment, rehabilitation or ongoing care and to pay for damage to the bike, protective clothing any other possessions that are affected by the incident.

You can make a motorcycle accident claim on the Compare Compensation Claims website. Simply navigate to the ‘Make A Claim’ section, select ‘Motorcyclist’, explain in as much detail what happened and what injuries you sustained, state the date of the incident and provide your contact information. A personal injury lawyer will then be in touch to speak to you about your chances of making a successful compensation claim.