Home » Blog » News » What are the main causes of pedestrian accidents?

What are the main causes of pedestrian accidents?

Thousands of road traffic accidents happen in the UK every year, causing injury, upset and sometimes even death to those involved. Although drivers are the first thing you are likely to think of when considering the devastating effects of incidents on the road, the impact on  pedestrians involved in these accidents is often overlooked. This is despite the fact that pedestrians are often subjected to more severe and potentially life-threatening injuries than drivers as they don’t have the protective shell of a road vehicle as a final line of defence.

Many incidents that occur on UK roads do indeed involve pedestrians, and in severe cases, can lead to serious injury or the loss of life. In this blog, we explain exactly what a pedestrian accident is before delving into statistics around pedestrian deaths from road traffic accidents and whether it’s possible to make a compensation claim as a pedestrian.

What is a pedestrian accident?

A pedestrian accident is a form of road traffic collision that involves a vehicle and someone on foot. Vehicles can cause serious physical harm or even death to a pedestrian. Rule 170 of the Highway Code that states a vehicle should give way to pedestrians who have started to cross the road.

Therefore, it’s often applicable that the driver will be at fault and the pedestrian would be entitled to compensation. Common examples of why a driver may be at fault for a pedestrian accident include driving recklessly or becoming distracted while driving, resulting in an injury caused to the pedestrian.

Following a pedestrian accident, a compensation settlement could pay for covering financial losses, physical, emotional and mental rehabilitation and the unquantifiable cost of upset caused by the incident. Compensation claims for pedestrian accidents are relatively common, but for a claim to be successful, it’s crucial that the driver is unanimously proven to be at fault for the incident. 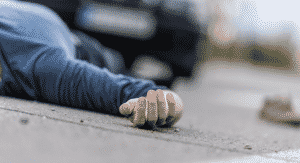 How many pedestrians die in road accidents each year?

Road safety charity Brake claim that a staggering 1,784 people were killed on UK roads in 2018 alone, with 456 being pedestrians and a further 25,511 people picking up a serious injury from a road accident.

These figures also indicate that 48 people out of the 1,784 were children aged somewhere between 0 and 15 and that 28 of them were pedestrians. Overall, just over a quarter of road deaths in 2018 were pedestrians, with 26 per cent of the fatalities being people that were on foot.

Where do most pedestrian accidents occur?

According to statistics from the Department of Transport, 83 per cent of the 5,396 pedestrians that were killed or seriously injured on UK roads in 2013 occured in urban areas. From the remaining 17 per cent of people killed or injured in road traffic accidents, 16 per cent occurred on rural roads and just one per cent happened on motorways.

In this report, it’s stated that the higher number of injuries and deaths on urban roads is simply caused by more pedestrians, busier roads, longer distances walked by pedestrians in these areas, a higher frequency of interactions between pedestrians and vehicle drivers and an overall increased likelihood of accidents occurring.

Can a pedestrian make a claim?

If you’ve been the victim of an accident, you’re entitled to make a compensation claim against the person at fault. While this is generally true of all incidents, it’s common for pedestrians to make claims against the drivers involved following a road traffic accident.

With very little protection as a pedestrian, injuries can be as minor as simple cuts and bruises or as severe as emotional trauma, broken bones, traumatic impact injuries to the head or spine and even death.

You can make a claim as a pedestrian through the Compare Compensation Claims website. All you need to do is provide details of the type of accident, describe what happened and provide details of injuries you suffered as a result. An expert injury solicitor will assess your claims and judge whether or not compensation could be due.