Home » Blog » News » How to claim after a bus accident

How to claim after a bus accident

Whether you use a bus service as part of your commute to work, ride into your local town at the weekend or even take regular coach tours or holidays each year, the least you expect is a safe and secure journey. However, as with other forms of mass and public transport, the risk of injury while riding a bus or coach can be high in the unfortunate event of a road traffic collision, sudden emergency stop or other accident.

This is because these substantial vehicles carry a large number of typically unrestrained passengers – both seated and standing – and injuries can easily occur when these passengers are thrown around the bus or fall during a journey. More often than not, an injury to a passenger is caused by them not being properly restrained, leading to injuries as minor as cuts and bruises or as severe as bone fractures, whiplash and damage to the head, neck and spine.

In this blog, we focus on public transport accidents, how bus passengers can claim for injuries sustained on this method of transportation and what exactly qualifies as a bus accident that is worthy of a claim.

How do I claim after a bus accident?

Following a bus accident, you may be considering claiming compensation for injury or upset caused by it. It’s possible to claim for a bus accident through the Compare Compensation Claims website or by calling directly to speak to an experienced injury lawyer. However, before doing this, it’s important that you’re aware of exactly what you can claim for and whether your claim is legitimate in the eyes of the law.

Can I claim if I’ve been injured on a bus?

Accidents that occur on busses are often rare and only minor, but UK law does allow for claims to be made against public transport providers. Not only that, but people injured by busses don’t even need to be inside the bus at the time of the incident. For instance, this would apply to anyone that is hit by a bus or someone that is affected by the impact of a bus accident long after the original incident occurred.

Potential injuries that could be caused by a bus include: 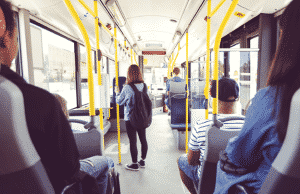 Can you claim if you fall down in a bus?

It is possible to claim for a slip, trip or fall that happened on a bus. However, this is only applicable if you’re not at fault. For instance, if the driver is driving erratically or your slip was the result of a spillage that was not correctly cleaned up, you could be entitled to compensation. But if you weren’t seated properly or did anything that led to the fall, it’s unlikely that you will stand a chance of making a successful claim.

How many bus accidents happen each year?

Statistics from a 2018 report into UK transport indicate that, while cars account for nearly half of the incidents on UK roads, other vehicles such as those used for public transport account for five per cent. Figures from the same year also show that there’s an average of 161 casualties specifically by bus per billion passenger miles.

How much compensation am I entitled to after a bus accident?

With any compensation claim, two categories are taken into consideration. The first is general damages from the direct effects of the incident such as the physical injuries, mental and emotional pain caused and the change to quality of life. The second is special damages for past and future loss of income, transportation costs, medical expenses and the repair or replacement of property altered by the incident.

General damages and special damages are also what you would look to claim for after a bus accident, and while you may be interested to learn how much compensation you could claim, the settlement figure will be based on the specific circumstances of the incident and how you’ve been affected by it.

Although each case is different, there are brackets for the level of compensation you would get based on injuries that typically come from bus accidents. These brackets include:

How to make a claim for an accident on a bus

If you have sustained injury as a passenger on a bus, in order to claim compensation it is important that you record details of your journey and keep your ticket as proof of travel. Medical attention should be sought for any injuries suffered. Also, if you are able to, take pictures at the scene.

If you are the victim of an accident caused by a bus and believe that you may be entitled to compensation, you should speak to an injury lawyer. To do this, all you need to do is go to the ‘make a claim’ section on the Compare Compensation Claims website, provide as much detail as possible in regards to what exactly happened and how you were affected, and someone will be in touch to discuss your options further.