Home » Blog » News » When can you claim train compensation?

When can you claim train compensation?

With thousands of people travelling on busses, trains and taxis every day, public transport accidents are a common occurrence that affects passengers in high numbers. Trains and train stations are extremely busy places, and with masses of people moving around in close proximity, it’s no real surprise that accidents happen.

If you’ve been the victim of a train accident and believe that it wasn’t your fault, you may be entitled to compensation. However, before making a claim, it’s important that you’re aware of what type of injuries qualify. In this blog, we look at train accidents, how they happen, when you’re entitled to claim and how you can go about making a claim.

How do train accidents occur?

Accidents on trains can be caused by a variety of different factors, with categories including derailments and collision with other trains, vehicles and pedestrians. In the case of derailments alone, the cause can be down to track failure, train component failure, unsuitable crossings or speeding.

Other causes of train accidents include:- 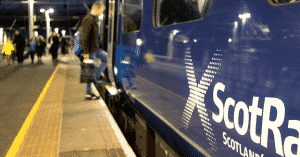 How many train accidents are there in a year?

According to the Office of Rail and Road, the number of train passenger fatalities rose from nine to 17 in 2018, equating to the highest figure in the last decade. In terms of injuries, there were 377 in 2018 on mainland trains – which was 6.5 per cent more than the year before – and 5,541 people injured on underground trains.

When can I claim train compensation?

If you were involved in a train accident and believe that it wasn’t your fault, you may be entitled to compensation. However, if you were at fault, it’s less likely that you will be able to make a successful claim.

Train accidents can happen in a number of ways and result in injuries ranging from minor cuts and bruises to permanent physical or emotional damage. As such, a settlement from a claim will ease the financial struggle from the incident and compensate for factors that can’t be quantified, such as emotional damage and the effects life-altering injuries can have on employment and overall quality of life.

Can you claim compensation if you fall off a train?

As soon as you enter a train, the company that the train belongs to becomes liable for any injuries you sustain providing you weren’t at fault. For instance, this would include any slips, trips or falls on the train that were caused by spillages, obstacles, handrails and supports in poor condition or reckless driving by the train operator.

Do train drivers get compensation?

How much is train compensation?

The settlement in any compensation claim is based on the sum of general damages and special damages owed to you as the victim of the incident.

In additional, if your injuries impact your ability to work and find new jobs in the future, you may be entitled to compensation for ‘loss of a dream job’ or disadvantage in the open labour market, known as ‘Smith and Manchester’ compensation.

As such, it can be difficult to estimate exactly what your claim is worth. However, there are some injuries that are commonly associated with train accidents, and with these injuries come brackets for how much compensation you’d be entitled to.

Examples of injuries relating to train accidents include:-

In order to make a successful claim you will need to keep evidence of your travel, ideally a train ticket, provide details of the train route and time and have sought medical attention so you can prove the cause of your injuries.  If you are able take pictures at the scene this can be used as evidence, particularly if claiming for a defect or spillage that has caused your accident.