Home » Blog » News » How do pedestrians cause accidents?

How do pedestrians cause accidents?

In the event of an accident on the road involving a vehicle and a pedestrian, it’s easy to assume that the person at fault is the driver of the vehicle that’s caused the damage. While this is often true and many compensation claims are made against drivers of vehicles involved in road traffic accidents each year, it’s also important to consider whether the fault could in fact be in the hands of the pedestrian involved in the incident.

Due to the lack of protection that would otherwise come with operating a vehicle, pedestrians are typically the most vulnerable people in a road traffic accident and are usually subjected to more severe injuries. However, if they’ve acted irresponsibly or directly caused the incident themselves, is it possible that they could be subject to a compensation claim?

In this blog, we look at whether pedestrians could be at fault for accidents and if it’s possible to make a claim against pedestrians if you’re involved in an accident they caused.

How pedestrians are responsible for accidents

Anyone involved in an accident can be at fault and this includes pedestrians. It’s more common for the blame to fall down to the driver of a vehicle, but it is possible for a pedestrian to be the proven cause.

Examples of scenarios where a pedestrian may be at fault for an road traffic accident include when they’re:

While a pedestrian under the influence of drugs and alcohol would be easy to identify after an accident, other scenarios could be harder to prove without evidence or witnesses. For this reason, it’s rare for a driver to attempt to claim against a pedestrian following a road traffic accident. 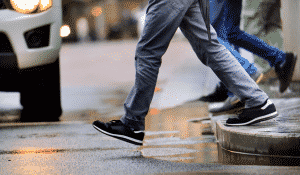 What happens if a pedestrian causes an accident?

Whenever a road traffic accident involving a pedestrian and a vehicle occurs, it’s always likely that the driver of the vehicle is going to be blamed. This could be due to a number of factors, but a primary reason is that their vehicle will cause significantly more damage than the person than the person will do to the driver and their vehicle. However, it’s not guaranteed that the driver would definitely be at fault.

If you’re a driver involved in a road traffic accident but believe that a pedestrian was at fault, you should do all you can to prove it. For instance, at the time of the crash, you shouldn’t imply that you were in any way at fault if you believe this to be the case and, where possible, you should document the accident to enforce claims that the pedestrian caused the accident and you didn’t.

It may be proven that you weren’t at fault if police arrive and see that the pedestrian was intoxicated at the time of the incident, for example, or eye witnesses support claims that the pedestrian was acting irresponsibly or walking in areas where a path isn’t provided. Unfortunately, it’s not always easy to prove fault at road traffic accidents, but if you were driving responsibly and didn’t do anything wrong, you shouldn’t have anything to worry about.

Can I claim against a pedestrian?

In any incident involving a pedestrian, it’s technically possible to make a claim against them as the person at fault. For a driver of a vehicle involved in the incident, a claim could be made to compensate for damage to the vehicle or any losses or injuries suffered by the driver. However, it’s often rare for a driver to claim compensation against a pedestrian as it would require proof that they were at fault.

It’s far harder to do this with pedestrians unless the person in question was purposefully causing an incident by acting erratically or walking out in front of traffic. Even then, supporting evidence such as eye witnesses would be needed. Without this level of evidence, it could be claimed that the driver should have been alert enough to react appropriately.

Although claiming against a pedestrian isn’t always applicable and may not result in a successful settlement, each case is different. If you’re involved in an accident and believe that a pedestrian is at fault, you should consider speaking to an injury lawyer to see whether you’re entitled to make a compensation claim.