Home » Blog » News » How to claim for whiplash

How to claim for whiplash

A common injury for many UK road users, whiplash accounts for an estimated 300,000 injuries per year, costing the economy around £3 billion. According to the Association of British Insurers (ABI), eight out of 10 personal injury claims from road traffic accidents are for whiplash.

With so many victims of road traffic accidents and similar incidents experiencing symptoms of whiplash, it’s a condition that has become commonplace on UK roads and to professional injury lawyers. In this blog, we explain exactly what whiplash is before answering some key questions around it and offering advice on how to make a claim for whiplash compensation.

What is a whiplash injury?

Caused by a sudden, powerful movement of the head, whiplash is an injury where rapid motion leaves muscles in the neck strained and the ligaments and tendons stretched out or even torn.

Although a common injury in road traffic accidents, incidents on other methods of transportation, slips, trips and falls, damage to the head and sports incidents, whiplash is typically a minor issue that can cause inconvenient pain and discomfort for a number of weeks. However, in some circumstances, whiplash has long-lasting or even permanent effects, leading many sufferers claiming compensation against the person responsible for the incident that caused the injury. 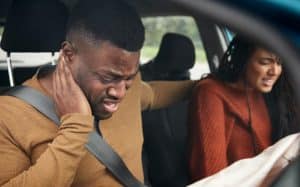 When someone is affected by whiplash, the severity may vary, but it’s often easy to identify and hard to ignore. Along with an intense feeling of pain around the neck, whiplash can also leave the person’s neck feeling extremely tight and near impossible to move as easily as usual.

What are the symptoms of whiplash?

Although whiplash is typically connected to a feeling of pain and restriction, every case is different and the sufferer may experience differing symptoms. We’ve outlined common symptoms of whiplash below to indicate how its effects may impact people in a variety of ways.

Common symptoms of whiplash include:

– Pain and tightness in the neck
– A feeling of tenderness
– Headaches at the base of the skull
– Increased pain when the head is moved in any direction
– An inability to move the neck as freely as usual
– Sporadic feelings of fatigue, irritability and dizziness
– A tingling sensation in the arms
– Muscle spasms in the shoulders and arms
– Blurred vision
– Ringing in the ears
– Trouble with concentration, memory and sleep.

How long can whiplash last?

The length of time whiplash can affect someone will vary on the severity. In minor cases, the symptoms could ease in days or weeks, while in more serious cases it could take years to return to a feeling of normality. Unfortunately, in extreme cases, the impact on the person could be permanent.

Additionally, whiplash can be hard to diagnose straight away as some people will experience it as soon as the incident has happened while others will only begin to see symptoms days, weeks or months after the incident has occured.

How to treat whiplash

Once you begin to experience symptoms of whiplash, it’s important that you get immediate medical attention. During a consultation with a doctor, you may be referred to a physiotherapist or be prescribed medication. However, in the meantime, you should apply ice to the affected area as soon as you feel pain and discomfort, take painkillers, wear a neck brace and then begin to apply heat.

Can you claim for whiplash?

You can attempt to claim compensation on any injuries sustained in an accident. Whiplash is no different, and with some insurance companies labelling the UK as the ‘whiplash capital of Europe’, it’s clearly an injury that is commonplace in many of the road traffic accidents that occur in the UK every year.

How much compensation can I get for whiplash?

In any compensation claim, the settlement will be made up of what’s known as general and special damages. General damages cover all forms of pain caused by the incident be it emotional, mental or physical as well as any direct effect it has had on your career or career prospects. Special damages, however, cover actual expenses from the incident and the effects afterwards, such as fees for medical treatment, prescriptions, transportation, rehabilitation, altered living arrangements and a loss of earnings, pension and any fees owed if you’ve been unable to work or have had to change profession.

Many of these factors will vary depending on the specific circumstances of the incident, injuries caused, the severity of these injuries and how victims have been impacted. More specifically, when someone involved in an accident experiences symptoms of whiplash, the amount of money they will receive in the settlement will be based on the severity of the injury in general damages and the cost of treatment as well as the effects of the injury in special damages.

What is the average whiplash settlement?

The amount of money you could be entitled to for a whiplash injury is likely to vary based on the severity and recovery time. Below, we have outlined these factors to indicate the settlement you may receive should you choose to make a claim:

How long does a whiplash claim take?

A compensation claim for whiplash can take longer than expected depending on the severity, other injuries involved and if the person at fault refuses to accept blame on their part. That said, on average, a whiplash compensation claim will typically take somewhere between four and six months to complete.

How do I claim whiplash compensation?

If you’ve experienced symptoms of whiplash following an accident and believe that you weren’t at fault, you may be entitled to compensation. However, while the above information may help with determining whether your claim is viable, the settlement you may receive and the time it could take for a settlement to process, each case is different and only a qualified injury solicitor can properly assist you with your claim.

To make a claim, all you need to do is go to the Whiplash Compensation page of the Road Traffic Accident section of the Compare Compensation Claims website and click on ‘Make a Claim’. You can then select whether you were a driver, passenger, motorcyclist, pedestrian or cyclist, describe what happened, explain your whiplash injury, and an injury lawyer will be in touch to discuss your claim.