Home » Blog » News » What are the major causes of road accidents?

What are the major causes of road accidents?

When a road accident occurs, it can be disorienting, upsetting and stressful for everyone involved. Immediately after the event, it’s easy to fall into a state of shock, as these accidents often happen completely without warning. However, regardless of the cause – be it a deep-seated habit of the person at fault, plain carelessness or freak circumstances that could not have been prevented – you shouldn’t have to suffer any long-term effects without the necessary help, especially if you were not to blame.

Establishing the reason for the road accident will play a key role in making a compensation claim against the person at fault. Without this, it may delay or even entirely prevent any chance of a successful claim.

What are the reasons for road accidents?

Many different factors can lead to an accident on the road. Although you could almost blame anything as the sole reason for a road accident, the primary causes include:

Despite being against the law, some drivers may be tempted to check their phone while driving, for example. Whether it’s to text, sip a drink or eat a snack, taking your eyes off the road for even a second could mean missing an important detail, resulting in an accident.

Ignoring the speed limit is something a lot of drivers do and, according to the Royal Society for the Prevention of Accidents, crashes caused by speeding led to nearly 400 deaths on UK roads in 2015 alone.

It’s important to remain alert of all other road users during car journeys and even when entering and exiting the vehicle. This not only includes other cars, but also pedestrians, cyclists and motorcyclists.

Rain, snow and ice all influence the road and how vehicles take to driving and braking. It’s safe to drive in these conditions providing drivers are being careful and cautious, but if they’re exceeding the speed limit, it’s even easier to cause an accident.

Studies suggest that driving while tired is a contributing factor to 20 per cent of accidents on the road. Additionally, drowsiness isn’t something that solely affects driving at night time either, with it being a factor for anyone that’s exhausted or driving soon after waking up.

Driving in a reckless manner can include being inconsiderate of other drivers, tailgating, changing lanes quickly and without warning, refusing to use indicators, braking suddenly and anything else that shows a lack of due care and attention while driving.

Being under the influence of drugs or alcohol can dramatically alter a driver’s movement, decision making and timing, leading to an increased risk to them and everyone else on the road.

With less visibility on the road, hazards are typically more difficult to see when it gets dark. Due to this, drivers need to be even more vigilant at night, as they’ll be less likely to see other cars, obstacles, objects in the road and pedestrians.

Obstructions in the road and issues with the condition of the surface can appear in a number of ways. Potholes are a good example, as they can be present on any road and can be the reason for damage to tyres or a sudden, unexpected jolt. 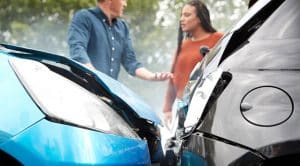 What is the main cause of road accidents?

Statistics from the Department for Transport make it possible to gauge the trends on the road based on trustworthy evidence. Their most recent report outlined statistics behind the most common causes of road accidents. Listed causes included failure to judge another driver’s direction or speed, careless or reckless driving while exceeding the speed limit, a poorly handled turn or maneuver, loss of control, a pedestrian failing to look properly, slippery road surface, exceeding the speed limit in poor road conditions, following too closely behind another vehicle or speeding.

However, the Department for Transport reported a significant number of road accidents caused by the driver failing to look properly, to such an extent that it was double the figure than the second most common cause.

How does speeding contribute to road accidents?

Speed limits are determined by the Department for Transport based on what is perceived as a safe speed to travel on each individual road. Driving at a speed that exceeds the limit is a likely cause of car accidents for a number of reasons.

For example, speeding means that there’s less time for drivers to acknowledge and react to their surroundings, increases the amount of time it takes for the car to come to a stop, enhances the effects caused by poor weather conditions and alters the driver’s typical safety margin, making narrow misses into likely crashes. A crash that happens at speed also increases the severity of injury and damage to people, property and other cars.