Home » Blog » News » When is a rear end collision not your fault?

When is a rear end collision not your fault?

Rear end collisions are a form of road traffic accident where one vehicle crashes into the back of another. In most cases, they occur in areas where vehicles come to a complete stop and drivers are required to judge when best to move off such as roundabouts and traffic lights, with the collision occurring when one of the drivers misjudges the timing of the other driver.

If you are looking to make a compensation claim against another driver following a rear end collision, you will need to prove that they were the one at fault. With this in mind, you may be interested to discover what the criteria is for being at fault for rear end collisions. In this blog, we look at this type of road traffic accident, how the person at fault is determined and other questions such as how long a settlement could take and how much money you could claim as the victim of a rear end collision.

Are you always at fault in a rear end collision?

The person at fault in a rear end collision is an important factor, as it will help determine whether or not anyone involved may be entitled to compensation. In any road traffic accident that requires police attendance, they are responsible for investigating the accident and determining the person – or persons – at fault.  After this, the insurance companies will confirm their position on who they believe to be liable for the accident.

Although the majority of rear end collisions are caused by the driver behind breaking too late or moving forward too early, leading to the crash, the driver in front breaking too early or abruptly coming to a halt can also be the reason why the collision occurred.  To avoid such an incident as the vehicle behind, you should always leave a suitable distance between your car and the car in front by driving at a speed that will allow you to stop in time. Additionally, you should remain extra vigilant if you’re in a larger, heavier vehicle as it will affect the time it takes to come to a complete stop.

As it’s possible for either driver to cause a rear end collision, you may be entitled to a claim regardless of whether you were the driver at the front or the back. 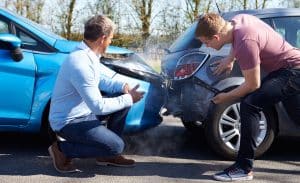 What is the average settlement for a rear end collision?

The amount of money you can claim for a rear end collision is dependent on the severity of the collision and how you were affected by it. When it comes to making a claim, the injury lawyer handling your case will consider ways in which the rear end collision has negatively impacted your life.

The two main factors for calculating what a claim is worth are:

Summarised as pain, suffering and loss of amenity (or PSLA), general damages are any form of negative impact the incident had on its victims. This could include a physical injury, psychological or emotional damage, an altered quality of life, the loss of a loved one or troubles relating to continued employment or finding a new job following the incident.

If an injury caused by the rear end collision led to an inability to work, special damages covers a loss of earnings or expenses that were a direct result of the incident.

What to look for after a rear end collision

Due to the unforeseen and spontaneous nature of rear end collisions, the jolting motion can cause a number of injuries. It can be difficult to remain calm and collected after any form of road traffic accident, but by looking for relevant symptoms and explaining them in thorough detail to the police during your report of the incident, you may be able to strengthen your future compensation claim.

It would be advisable to make notes of any relevant details, as they may help with your compensation claim, as well as any claim you may need to make on your insurance. In terms of injuries, you should check for symptoms of whiplash such as any feelings of pain or stiffness in your neck. You should also be wary of headaches or back pain, as well as any changes to your mood or movement, as this could be a sign that you’ve experienced a level of traumatic brain injury, which is only likely to worsen without immediate treatment from a healthcare professional.

How long does a rear end collision settlement take?

As with all road traffic accident claims, a rear end collision claim could take anywhere between six and twelve months to settle. The duration of a settlement is often based on determining the person at fault for the incident and proving personal damage – whether that’s physical or emotional – through trustworthy evidence.