Home » Blog » News » What are the types of collision?

What are the types of collision?

During a compensation claim for a road traffic accident, many factors are considered to determine whether the claim is valid. An important part of this is based on how the collision happened, as the different types of collision may be used to identify the person at fault for the incident.

In this informative blog, we look at what qualifies as a collision, the different types of collisions that can happen, how they’re recognised for making a compensation claim and explain the most common types.

What is a traffic collision?

A traffic collision is when a mechanically-propelled vehicle makes contact with something else in a public place. When this happens, everyone involved in the incident is required by law to follow a number of steps and report the incident to the police where necessary.

If a property or vehicle was left with damage as a result of the incident, the owner should be able to claim on their insurance. As a final step, anybody injured in the accident has the option to make a compensation claim against the person at fault. Technically, it’s possible to be the victim of a traffic collision if you were a passenger, on foot, in another vehicle, motorbike, bicycle or even on a horse. 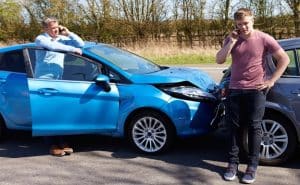 What is classed as a road collision?

In UK law, collisions are reportable if a vehicle causes damage to a selection of specified items. More specifically, these are anyone other than the driver of the vehicle, animals such as dogs, cats and cattle that weren’t being carried by the responsible vehicle, other damaged vehicles and any property that is built on, attached to or part of the land that the incident happened on. Despite the title, road collisions can occur in other public places such as car parks.

What is a head-on collision?

Also known as frontal collisions, a head-on collision is where two vehicles directly drive into each other.

Collisions of this variety aren’t as likely to happen as the other two due to the nature of how they occur, but as the vehicles are often driving at speed when they connect, they can result in severe injury or even death. Determining the person at fault can be relatively easy, as – for a head-on collision to occur – one of the two cars is likely to have veered onto the wrong side of the road, towards oncoming traffic.

What is a side-on collision?

Sometimes referred to as side impact, broadside or t-bone accidents, side-on collisions are ones where the front of one vehicle crashes into the side of another.

In most cases, side-on collisions occur at crossroads and busy junctions, and even slow collisions can cause serious injury to people in the impacted car, as the car could be crashing directly into the door next to them. This type of collision is common, with 25 per cent of all vehicle accidents being side-on.

What is a rear-end collision?

A rear-end collision is when one vehicle crashes into the back of another. They typically happen when one car is tailgating another or when the car in front brakes too sharply, leading to a collision from behind.

Often occurring at traffic lights or roundabouts when the driver in front suddenly slows down, stops, or doesn’t move at the expected moment, rear-end collisions can cause injuries to the back, neck, spine or brain. They can also result in broken bones.