What is an RTA?

You may have heard of the term RTA in relation to making personal injury claims. RTA stands for road traffic accident.

Both versions of this term are used by compensation claim solicitors, but what exactly is a road traffic accident? In this blog, we explain what an RTA is, what to do if you’re involved in one and how you can claim compensation.

What is a road traffic accident?

A road traffic accident is a type of incident involving a motor vehicle where a person, animal, vehicle or section of property is left damaged as a result. It was formally outlined in the Road Traffic Act 1988 as an accident on any road or public place in England and Wales, with different rules set out for other parts of the UK such as Scotland and Northern Ireland.

Although the Road Traffic Act 1988 defines an RTA as being an incident involving the use of a motor vehicle, they can also involve a bicycle, pedestrian or a public transport vehicle.

According to road safety charity Brake, on average, five people die on UK roads every day, with countless others left injured due to road traffic accidents. It’s common for the victims of RTAs to make compensation claims against the people that were at fault for physical injuries as well as, in some cases, psychological or emotional damage caused by the accident. 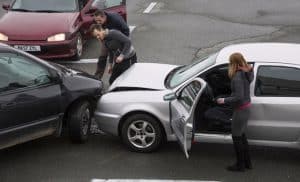 What to do if you have a road traffic accident

If you’re unfortunate enough to be involved in a road traffic accident, it can be disorienting and distressing. However, by following a few simple steps, you will be able to react in an appropriate manner. Not only that, but you will also improve your chances of putting forward a valid claim should you seek compensation.

After being involved in a road traffic accident, you should:

Call the police – Start by calling the police to report the incident. This is a legal requirement under the Road Traffic Act and you have 24 hours to do this, either via a police station, police constable or the non-emergency number. However, reporting a road traffic accident to the police is only necessary if it was a major incident, caused serious injuries or if it resulted in damage or debris being left in the area it occurred.

Additional benefits to reporting a road traffic accident include that the police will create an accident report and accompanying reference number for the specific incident. These details are important factors when it comes to making a compensation claim.

Seek medical help – If the incident has resulted in an injury, left you feeling unwell or emotionally distressed, you should see a doctor as soon as you can. Depending on the seriousness of your symptoms, you can decide between going to a hospital or doctor’s surgery. As with an accident report, visiting a healthcare professional will also strengthen a compensation claim by showing proof of any injuries caused by the accident.

Gather witnesses – When you’ve checked that you and anyone else involved in the incident is safe, talk to any witnesses that saw the incident and make a note of their details. Their accounts could eventually play a key role in your compensation claim.

Document everything – When involved in a road traffic accident, remembering every detail is unlikely to be at the forefront of your mind, but it could end up being crucial in a compensation claim should you choose to make one. Make as many notes as possible, even if you think some of the details are obvious or unnecessary. This could include your actions prior to the incident, what exactly happened, how it happened, where it happened and anything that was said during or after the incident. Even minor details could end up being important when it comes to making a claim.

Take pictures – If possible, take pictures of all involved vehicles, the area the incident happened and anything else that could be relevant when it comes to making your claim.

Make your compensation claim – after gathering all of the information you need, you can consider making a claim. When you make a compensation claim, you are given a free consultation to see whether or not you’re in a suitable position to receive compensation. If successful, a claim can take any length of time based on a number of factors such as details of the incident and the amount of evidence you’ve gathered, but all of this can be discussed at length during the consultation process.